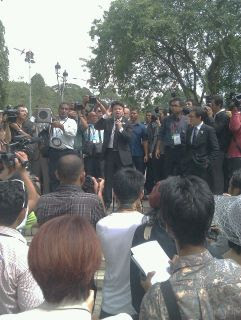 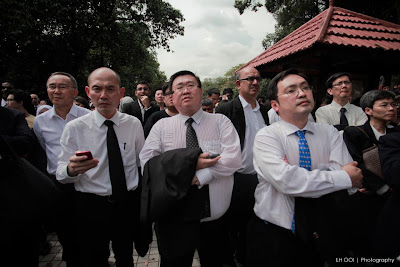 Malaysian Bar president Lim Chee Wee spoke to the crowd of lawyers & NGOs at the before the Walk For Freedom march (Photos by Lim Lip Eng & Ooi Leng Hang)
Source: http://thestar.com.my/news/story.asp?file=/2011/11/30/nation/10003037&sec=nation (By REGINA LEE, 30/11/2011)
The idyllic here saw a different scene when hundreds of lawyers gathered to protest against the Peaceful Assembly Bill. Led by Bar Council president Lim Chee Wee, they marched about half a kilometre to Parliament House to hand over a memorandum and their own proposed amendments at noon yesterday.
Joining them in the Walk to Freedom were civil society activists, including Bersih 2.0 chairman Datuk Ambiga Sreenevasan.
Lim said the Attorney-General had consulted the council several weeks ago over the drafting of the Bill. “But the version that was tabled was very different,” he said.
The PKR representatives in the march included MPs Zuraida Kamaruddin (Ampang), Loh Gwo Burne (Kelana Jaya) as well as Seri Andalas assemblymen Dr Xavier Jeyakumar and officials and Latheefa Koya.
The DAP representatives included MPs Lim Lip Eng (Segambut) and Wong Ho Leng (Sibu) while PAS was represented by Parit Buntar MP Mujahid Yusof Rawa and central committee member Hanipa Maidin.
Constitutional law committee chairman Syahredzan Johan said the provisions were “ridiculous”.
As they marched towards the Parliament building, another group, calling itself Pertubuhan Putra , appeared at the opposite side of the road to protest against “free sex” and homosexuality. Numbering about 100, they wore yellow T-shirts and carried banners condemning sexuality rights festival organiser Seksualiti Merdeka. They attempted to drown out the lawyers’ chants of “freedom of the people” and “freedom of assembly” with their own cries of “anti-sodomy” and “no free sex”. Seksualiti Merdeka founder Pang Khee Teik was spotted among the lawyers and made no fuss over the other group’s protest.
The crowd began to disperse at 1.30pm, about 20 minutes before a downpour. Dang Wangi OCPD Asst Comm Zulkarnain Abdul Rahman said no untoward incident occurred during the protests, adding that the crowd of about 500 were cooperative. “They complied with police instructions,” he said, adding that they only led to traffic complications in the area.
Related news: More than 1,000 march against Assembly Bill http://www.malaysiakini.com/news/182663

LIM LIP ENG 林立迎
Segambut, Kuala Lumpur, Malaysia
LLB(Hons), CLP, MBA(UEL,UK). A Christian, a husband, a dad, a lawyer & a MP. My Objective: To make Malaysia a better, happier place for all people.