Pile of waste by the road an eyesore 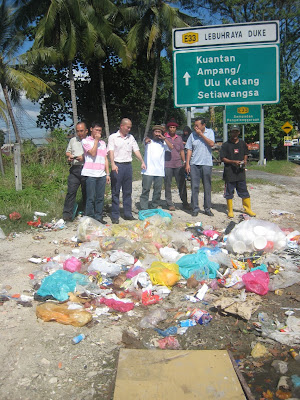 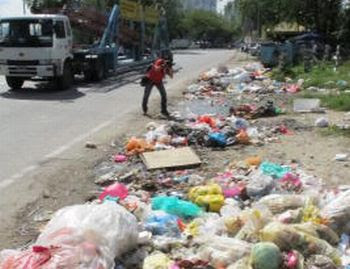 Long trail of rubbish: One side of Jalan 1/42 that has become a garbage dump.
Source: http://thestar.com.my/metro/story.asp?file=/2011/11/28/central/9985070&sec=central (By CHOONG MEK ZHIN, 28/11/2011)
For years residents of Kampung Segambut Luar and Kampung Segambut Permai have been living near a rubbish dump. The dump in Jalan 1/42 can also be seen from Jalan Kuching that runs parallel to the road.
Pensioner Khairuddin Karim, 56, said the rubbish collection truck came on schedule once every three days but within that short span of time, a big pile of garbage would have accumulated at the spot.
One of the main worries of the villagers is that the pile attracts stray animals and rodents. “At night, a large group of stray dogs scavenge for food at the pile of rubbish and in the process garbage gets scattered everywhere. Rodents are also attracted to the pile,” he said. Khairuddin said they feared the pests could cause diseases. He also highlighted the problem of clogged drains which could caused flash floods.
Segambut MP Lim Lip Eng said about three years ago, there used to be large metal rubbish bins where the dump was located. “However, some residents claimed that these bins were taken by scrap metal collectors,” he said, adding that about 100 households used the spot to dump garbage.
Lim hoped DBKL would provide some new communal bins to keep the area clean. “The pile of rubbish is an eyesore and creates a bad impression of the city as well,” he said.

LIM LIP ENG 林立迎
Segambut, Kuala Lumpur, Malaysia
LLB(Hons), CLP, MBA(UEL,UK). A Christian, a husband, a dad, a lawyer & a MP. My Objective: To make Malaysia a better, happier place for all people.